YAW OF WAZOBIA FM STARTS HIS OWN SIT-COM 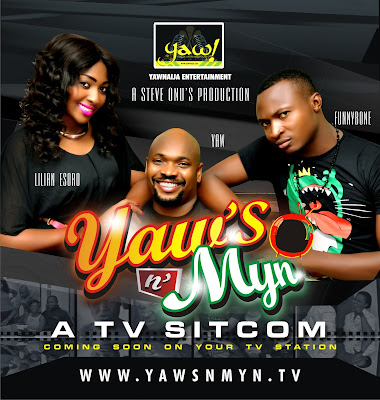 Yaws ‘n’ Myn, is basically a 30-minute weekly sitcom that follows the dysfunctional life of a Radio presenter Yaw who is shackled in the same house with his brother Raluchukwu and sister Chetachukwu.
As for Yaw, life was all normal till his parents left to work in America and leave him to take care of his grown siblings. Ral who thinks he is a great music talent but rather not and Cheta who spends more time in the mirror and can’t cook at all. Thrown into the mix is their weird tenant who they sublet one of their rooms to, their grandmother who speaks just Igbo language, their Hausa gateman (retired soldier) and a troublesome aunt. With an unending drama and a life time laughs. The sitcom follows the dynamics of five different people living together.
The sitcom features some of Nigeria’s most talented actors – Yaw, Stanley “FunnyBone” Chibunna, Lilian Esoro, Ngozi Nwosu, Tina Mba, Ufuoma Ejenobor, is the latest from Yawnaija Entertainment; a leading brand in the entertainment industry  headed by Yaw. Steve Onu (YAW) is an On-Air Personality on 95.1 Wazobia FM, an Actor, Producer, Presenter, Philanthropist and Master of Ceremony. Steve Onu is the first and only On Air Personality and Comedian chosen alongside other notable Nigerians as Olympic Torch bearers for the London 2012 Olympics. He is a United Nations Young Ambassador for Peace and the UN Face of Peace (2012).
Yawnaija Entertainment is working on an application for the sitcom to be played on mobile phone as mobile game. A radio drama version would also be aired on various radio stations in Nigeria and across the globe.
Yaws n Myn will show on VOX Africa, DSTV, Oh TV(UK), Nollywood Films (UK), Klear TV (UK), The African Channel TV (UK), STV, LTV8, SABC South Africa.
It will be showing from January, 2013 but before it hits your TV screens at home, YAWS 'N' MINE will be premiering at the Silverbird Cinemas in Lagos on Sunday 16th December. The event is strictly by invitation.
For more information, Visit the Facebook Page: www.facebook.com/yawsnmyn Also follow on twitter @yawsnmyn and Visit www.yawsnmyn.tv Call YAW on 08065293138, 08055588852, Subscribe to www.youtube.com/user/yawnaija 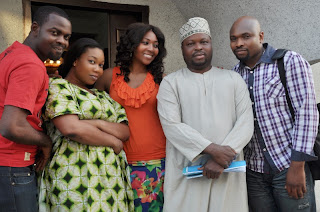 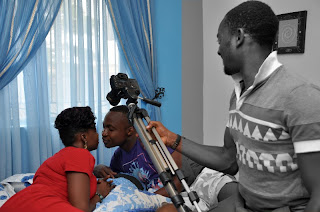 Posted by Daniel Ademinokan at 09:43