NO JERSEY, NO MATCH! 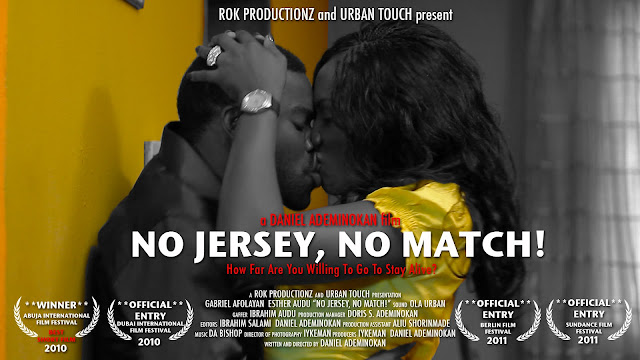 I have received hundreds of emails based on my last article “IF YOU WANNA SHOOT...SHOOT! DON’T TALK!”. Jesus! I am super excited that several people were inspired by that article.   I believe that when knowledge is shared, someone else will take it from where you stopped and push it to a greater hight; that is how development can come to an industry like ours where the evolution of creativity is key.

I got an email from James Nsoro who lives in Lagos and he asked me,

“Mr Ademinokan you were lucky to have a brother in-law who owns a Sony Hi-8 camera. What if I don’t have anybody who owns one and is willing to give me to use free of charge what will I do?”

Thanks James for the email. I will say that this is a very common problem that young or first-time filmmakers face. The great thing now is that you really don’t need a super camera to get your work done. I have seen film festivals that accept movies shot with smart phones. You can use your iPhone, Blackberry, Android, Samsung, etc to get high quality pictures. Remember, you are not filming to screen at the AMC Theatre on 42nd St, New York. What you are trying to achieve is to kill the spirit of procrastination and break the jinx. Also, you will have your name on a film...kapish!!

Another thing you can do is to meet someone who has a camera and strike a deal with him. If he is a cinematographer who has a camera and some gear, agree to give him/her credit as co-producer, associate producer or if he can, let him be your Director of Photography (if he has any measure of experience). One thing you should be careful about is this...do not let this person dictate to you what you will do with your film or how you want to do it!

Don’t get me wrong here. I am not saying you should not open your mind to suggestions and opinions from people. The filmmaking process is a collaborative one and you can not know it all but do not put your film at the mercy of someone else to the point that they will begin to dictate how you should do the film and things you should throw out.

1. It is YOUR film. It is YOUR idea: The idea to make the movie was yours in the first place and you brought this other person into the picture, right? If he is there to help you achieve YOUR dreams, then let him do that. Don’t let anyone try to revive their careers though you. You know how you want your film to look and what you saw in your head before you set out to film. Take good advice and filter what you don’t need.

2. You are not trying to make a box office hit...at least not yet: What you are trying to do is to get used to the concept of running your own show and calling the shots. You want to get the feel of the filmmaking experience on a small scale. Do not be afraid to make mistakes. I believe that every filmmaker has at least 3 bad films in them so why not start early and make all the bad films you can make before you are famous, right? Just make sure that you learn some serious lessons from whatever mistakes you make. If you make mistakes as regards “line of action”...big deal! Just don’t make it when you are doing the next on

3. Take notes: Yes! Keep a small journal and document the challenges you encountered as you were working. Write down what happened that made you start work at 1pm instead of 10 am that was your call time. Notes like this will help you plan better when you are doing another production. It works like magic!

4. Don’t rush: One phrase I hate to hear on production sets is “Let’s go! Let’s go!”. Damn!! This drives me nuts because in my opinion, you spend 2 months planning for a production and by the time you get there for the actual photography/filming, they want you to get it done in 5 minutes. Yes you have planned so why not just let all the elements come into place properly then capture it because it is what you capture that will be frozen in time..not the duration of preparation. Nobody wants to know how long you planned for; we just want to see a good film with creative shots and good story telling. We can only evaluate your film based on what you have captured. Do not let anybody rush you as you want to get your shot. If you feel the lighting is not the way you want it, fix it. If you need to re-frame your shot to get the right composition...do it. If your director of photography is impatient, let him know he has to chill for you to get your job done. Now, this is not a license for you to become a snail when your working. This can be permitted because its your first film and also its a “no-budget” film. When you start working for big studios though, the story will change because every minute you waste costs money but by then, you will be more experienced. They key...is YOU KNOWING EXACTLY WHAT YOU WANT EVEN BEFORE YOU STEP OUT OF YOUR ROOM IN THE MORNING TO GO OUT AND FILM!

In 2010, while filming ETI KETA with Saidi Balogun in Kwara State, I had an idea for a campaign against the spread of HIV/AIDS with the use of condoms. I shared it with my friends on set and they thought it would be hilarious and a fun thing to do. A couple of months later, I met a friend named Iykeman who had a Canon 7D camera a few lights I could use. I shared my idea with him and he loved it. He agreed to give me his camera and lights to work with and in return he would share producer credits with me. Iykeman was also a director of photography and that was a huge advantage. I wrote the script and titled it NO JERSEY NO MATCH, got the locations, planned logistics and we were good to go. We got our friends who were working actors to feature in it and they jumped at the offer because they loved the concept of film. Even when we could clearly afford more, this short film did not cost us more than $200 to make because everything we used ... we owned.

I thought it would be cool to finally share this movie with the rest of the world as a christmas present. Emmm...age restriction applies here ooo! For mature audience only.

Click here to watch NO JERSEY, NO MATCH!
Posted by Daniel Ademinokan at 05:49